Home
Blog
What I Wish Everyone Knew about Foster Care Adoption

I’ve been a foster parent for the better part of the last four years. In March 2013, I started the process to become licensed in the state of Texas. By May, I had completed those requirements and was licensed in June of that same year. In July, I began receiving calls for placements. I accepted a call on July 12, 2013 for my first placement. A little boy, who I was told was non-verbal, came to my door at two years and seven months old. I was not this little one’s first placement into foster care. By the time my little guy came to me that July 12th he had already been moved three times. This is what foster care adoption can look like.

The first aspect to know about adoption from foster care that I believe anyone fostering to adopt needs to understand is that it takes A LONG TIME to get to the point of adoption in most cases. My son came to me in the summer of 2013. His parents’ visitation rights were terminated in October of 2014. The case didn’t move to terminate parental rights until October of 2015.  Parental rights were not terminated until February of 2016. His biological mother appealed the decision to have her rights terminated. The appeal wasn’t denied until June of 2016. Adoption wasn’t finalized until September 1, 2016. By this time, my little guy had been in foster care for nearly four years, and hadn’t seen his biological parents in two of those four years.

2. Not Every Case Will Move To Adoption

Not all cases move to adoption, no matter how long the child is in your care. Just because a child comes into your care does not mean that child will become adoptable. The number one motive of foster care is to reunite families. Often times, families are given years to try to get custody of their children back.

Infant adoptions, especially newborn adoptions, from foster care are RARE. Even if a family takes a baby home from the hospital to foster, it is unlikely they will be able to adopt that child. The reason being the above point (the goal of foster care is family reunification, and the parents are given a lot of time to try to gain custody of their children back).

4. Adoption from foster care IS POSSIBLE!

In the state of Texas alone there are more than 6000 children waiting to be adopted from foster care.

A person does not have to be married, wealthy, a stay-at-home parent, be of a certain sexual orientation, or be of a certain religion to adopt a child from foster care. I became a foster parent as a single woman at age 34. I am certainly not wealthy, but I do work full-time. I cannot afford to be a stay-at-home parent, but the state has always paid for my foster children’s daycare expenses while they were in foster care. All one must provide is a safe, loving home, free of a criminal history.

There is RARELY A FINANCIAL COST to adopting from foster care. Often times the state pays the attorney fees needed to file an adoption of a foster child once parental rights have been terminated. The key is to find an attorney who will file the adoption for the amount of the fee that the Department of Family and Protective Services will pay. The attorney that I hired charged me NOTHING out of pocket to adopt my son. There is often financial benefits to a family once a child is adopted. Depending on the special circumstances of the child you adopt they may qualify for an adoption subsidy. My son, because he is a minority over the age of two at the time of adoption, qualified for the full subsidy, which in Texas is $400 per month until he turns 18.

7. There Will Be An Emotional Toll

Fighting for a foster child and praying to adopt them takes a huge emotional toll. The fight is worth it, but it’s best to be prepared for what could happen and that the judge may not rule on the side of the foster parents. Have support from others around you, because you’ll need it regardless of the outcome.

8. Your Life Will Never Be The Same

Adopting from foster care will change your life and the life of the child/children you adopt. To see a child flourish, grow, and become the little people they were meant to be, despite knowing the life they came out of, is one of the greatest blessings anyone could ever ask for in life. Often times the toll was so great on me in the fight for my son, that I wanted to give up, but I knew this child as well as others I fostered needed me to be their voice, needed me to fight for them, and if I didn’t there was no idea where they would end up or what would have become of them.

When you adopt or foster an infant, one word that is seldom discussed is trauma. People naturally assume a newborn is a clean slate when in fact the child has 9 months of “information” imprinted in his little body.

When a baby is being formed in the womb he is in a sense subject to whatever his mother is experiencing, be it good or bad. If the mom to be is calm and joyfully anticipating his arrival, he will be conditioned to expect the world to be a happy place when he is born. If however the mother to be has been abused, is consuming illegal substances or has mental health issues, the baby may well be born already assuming the world is a hard, scary place. This is because an unborn child is already subconsciously if you will, learning what the world is all about even before he makes his debut.

To read more advice and stories about foster care adoption, or to join in on the adoption discussion, visit Adoption.com/forums to find adoption boards, and forums. 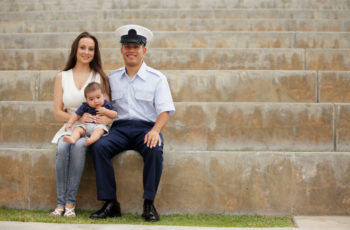 When a military member, or family, decides to adopt, it …